ROUTES TO STRENGTH AND CONTROL

Oriental martial arts develop your inner self as much as your body. They combine discipline with self-control and rigorous practice. Some martial arts emphasise strength and agility; others clear your mind; all are gloriously invigorating and life-affirming. Our martial arts expert, Dr Sifu Reginald Cann, has been practising since he was a young teenager. He’s now a master of the following disciplines: the Shaolin style of Kung Fu, Qi Gong (Including Medical Qi Gong), and Tai Chi. At COHA, he leads regular classes and private lessons, and is available for seminars.

Nothing beats trying it yourself

If you’ve never tried a martial art, the time to start experimenting is now. And if you’re already an expert, this is the place to raise your skills and understanding to the next level. 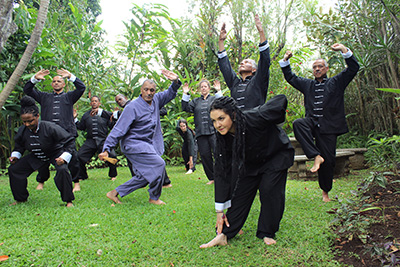 This slow and graceful Chinese martial art leads you through a series of postures and meditative breathing techniques. The rhythmic movements enhance your chi or life force, build strength and stamina, develop posture and good bodily alignment, and inspire inner peace. Anyone can practise Tai Chi (pronounced ‘tie-chee’) alone or in a group. Absolutely no equipment is needed. 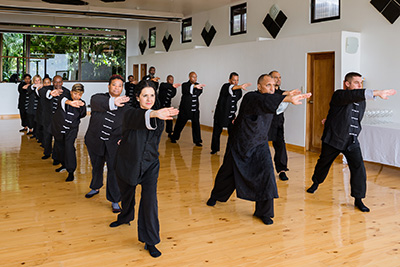 Qi gong (pronounced ‘chee-gong’) teaches you how to control your own personal energy through breathing, postures, and meditation. By controlling your chi or life force, you can improve your physical and mental wellbeing.

The graceful and disciplined movements comprising the practice of tai chi have their derivation in martial arts, Daoist philosophy and traditional Chinese medicine. Like many eastern practices, these movements affect the balance of yin and yang and promote the flow of qi. Consistent with Daoist philosophy and traditional Chinese medicine, the practice of tai chi seeks to reunite the mind-body connection that western thought has severed. That which affects the body also affects the mind, and vice versa.

Through the regular practice of tai chi, the individual’s world-view and level of awareness can be transformed. This transformation is spiritual and has little to do with societal values or judgments. The very nature of the art demands surrender to the present moment. Rather than fighting what is, the practitioner surrenders to the flow, to the Dao. Through this transformative practice, the Daoist comes to view stress as an experience that is created by the individual. This experienced realization enables the practitioner to better modify his or her internal reaction to perceived stressful events. In short, through the practice of tai chi, the individual becomes calmer.

Tai Chi has all the benefits of moderate exercise with less risk of injury. Arthur Rosenfeld, respected martial arts master and philosopher, states that the use of spiral movements in tai chi, as opposed to stretching in a straight motion, increases calmness and enhances the flexibility of joints and muscles. He also states that the physical benefits are at least equal to moderate exercise, which he defines as something more than walking. Additionally, the movements are engaging and more interesting than jogging or working out in a gym.

The gentle movements of Tai Chi make it accessible to individuals of all ages and fitness levels. This is particularly beneficial for an aging population where the risk of falls and bone fractures occur with increasing frequency. Bone health and balance is one focus of the research of Peter M. Wayne, director of Tai Chi research at the Osher Center. Wayne and his research team have conducted reviews of the literature in this area and have concluded that there is solid evidence suggesting that tai chi can improve balance and reduce the risk of falls in older individuals.

In a 2007 study conducted in the United States by the National Institute of Health’s National Center for Complementary and Alternative Medicine (NCCAM), while studying the immune response to the virus that causes shingles, researchers found that tai chi may enhance the overall functioning of the immune system. The Institute has studied tai chi’s impact on improving the quality of life for HIV patients as well as providing other healthful benefits in patients with breast cancer, cardiovascular disease, hypertension and osteoarthritis. A NCCAM-funded literature review also found that tai chi reduced the participants’ blood pressure in 22 of 26 studies.

Citing mainstream research by western institutions provides evidence of the benefits of tai chi practice using our empirical methodologies. Empirical research may help market the benefits of eastern practices to the western world. However, the proof of a multitude of physical and mental health benefits are in the practice.

Qi Gong (pronounced chee gung) is an ancient Chinese practice that, through a series of physical movements and postures, and breathing techniques, provides increased physical, mental, and emotional health. It is martial, medical, and physical and can be done from a moving or non-moving posture, mental focus, and breathing techniques. Qi gong is used to cleanse and heal the body. It can also be emitted to help heal others. Qi Gong is a practice that can be adapted by anyone as the movements are slow and gentle.

Studies have indicated that the practice of Qi Gong strengthens the immune system by positively affecting neurohormones. Neurohormones are chemicals that are found within the brain and are active in immune function throughout the entire body. An ongoing practice of Qi Gong also improves concentration and mental faculties by clarifying that which supports these two components. When the inner being is nourished, it allows for improved concentration abilities as well as improving mental clarity.

Western medicine is believed by many to be the way to cure many chronic ailments. However, it is becoming increasingly more evident that Western medicine is not the only way to cure or prevent illnesses. Qi Gong is effective in curing and preventing chronic illness in that it restores blocked energy flow so that your body systems are functioning at optimal levels at all times.

When all of the systems are functioning properly, the result will be increased physical energy. Qi Gong repairs and maintains the central nervous system, cardiovascular system, respiratory system, lymphatic system, mind, spirit, and emotions. When the body is truly nourished with Qi, abundant physical energy is a given. Sexual energy is not about what position excites the libido. It is the energy that is put into it. Qi Gong teaches about the importance of the meridian points. A major contributor to sexual dysfunction is the kidneys. If there is a blockage of energy involving the kidneys, achieving orgasm can be difficult or even impossible. Qi Gong works to improve and restore vitality and sexual energy.

COHA HEALTH, located in Bermuda, combines eastern and western philosophies. The result is a comprehensive program that promotes wellness, balance, renewed energy and vitality, as well as spiritual and self-awareness. At COHA HEALTH, guests are given instructions on controlling Qi for improved overall physical, mental, and emotional health. For anyone who is seeking to make life-changing improvements in his or her overall well-being, a Qi Gong practice will yield superb results.